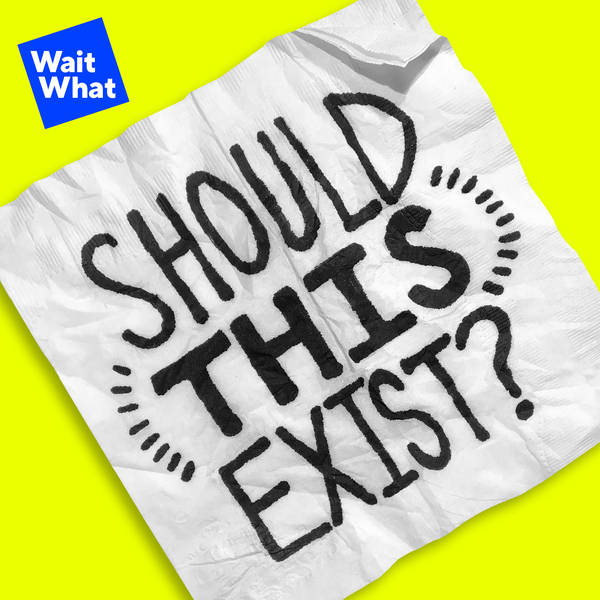 It's the question of our times: How is technology impacting our humanity? "Should This Exist?" invites the creators of radical new technologies to set aside their business plan, and think through the human side: What is the invention’s greatest promise? And what could possibly go wrong? Show host Caterina Fake (Partner, Yes VC; Cofounder Flickr) is a celebrated tech pioneer and one of Silicon Valley’s most eloquent commentators on technology and the human condition. Joined by a roster of all-star expert guests who have a knack for looking around corners, Caterina drops listeners into the minds of today’s ingenious entrepreneurs and guides them through the journey of foreseeing what their technology might do to us, and for us. Should This Exist? is a WaitWhat original series in partnership with Quartz.

This short trailer offers a taste of a new podcast from the team that created Should This Exist? And just like STE, it's unlike anything you've heard before. In each episode of Meditative Story, you'll hear a storyteller who will transport you to a time and place where everything changed for them, telling a story you might find yourself relating to deeply. As the story unfolds, mindfulness guide Rohan will offer gentle prompts to settle you more deeply into the story, and calm your mind.The entire experience is elevated with breathtaking music — all giving you the headspace to feel restored and refreshed. Subscribe today.
30/07/194m 38s

The web is broken. Data is mined, sold, and exploited. Social media is an endless and biased scroll through the worst of humanity. Nobody’s personal information is safe. And worst of all, it’s inescapable. The web is a cornerstone of our lives. It’s how we work, communicate with each other, and get information. And it wasn’t supposed to be like this. How did a utopian vision of a free, open, and democratic internet turn into nothing more than a machine for marketing and surveillance? In the season finale of Should This Exist?, Caterina Fake is joined by early web adopters Steven Berlin Johnson, Anil Dash, and Kevin Delaney to ask: Where did the web go wrong? Could we have prevented it? And what, if anything, can we now do to fix it? It’s a question that affects us all and will determine the future of our lives online… and off.
16/07/1927m 24s

How to hack your way out of aging

Imagine meeting your great-great-great-grandkids. Or going to law school in your 80s, learning to snowboard at 110, taking a gap decade instead of a gap year. Greg Bailey dreams of a world where everybody lives twice as long, and no one gets sick. His startup, Juvenescence, is developing a whole ecosystem of anti-aging medications to help you live longer, healthier. Which sounds great. But would this world of perky centenarians wreak havoc on our already strained resources? Would natural aging become taboo? Would dying? It's a technology that prompts us to ask some of the biggest questions of all.
27/06/1932m 8s

Want your voice heard on Should This Exist?

Want your voice heard on Should This Exist? An upcoming episode explores gerontology, the science of aging, and new technologies being developed to help humans live longer and healthier lives. Host Caterina Fake and her panel of guests will examine death, aging and the human quest to live longer than ever before. And we want you to be part of the show!Just answer the following question In a voice memo: If you could take a pill that let you live to be 150...would you take it? What would you do with that extra time?Send your voice memo to ShouldThisExist@waitwhat.com
05/06/191m 11s

The next gen of meat will be grown in a lab

Imagine biting into a steak that didn’t come from a cow. Or a chicken breast that did not come from a chicken. Imagine if your favorite meat dish did not involve an animal getting killed. This is Isha Datar’s dream. She is a scientist on a mission to not only reinvent meat but the entire meat industry. If Isha's dream comes true, we'll live in a post-animal bioeconomy where animal products – from meat to leather and wool – are harvested from cell cultures, not animals. And we're able to feed a growing global population sustainably, affordably and safely.But does meat grown in a lab really take animals out of the picture? And do we want to step further into a landscape of man-made, mass-produced food? Host Caterina Fake discusses the possibilities and pitfalls with Isha Datar, executive director of New Harvest, and Kevin Delaney (Quartz Editor-in-Chief); Ben Turley and Brent Young (owners, The Meat Hook); and Andrew Pelling (biophysicist).
30/05/1935m 19s

What if you could Photoshop your voice?

Mike Pappas and Carter Huffman believe their invention fulfills the promise of the digital world: the complete freedom to design your identity. But what if we all used it? The human voice is a key marker of authenticity and individuality, and Modulate uses A.I to transform your voice into anything you want it to be. In real time. If you’re a woman and want to sound like a man, Modulate can help you. If you’re a teen and want to sound like a grandparent, Modulate can do that. If you’re from Italy but want to adopt a French accent, speak into Modulate, and you will. Should this exist? The gift of free expression also comes with a price. Yes: Modulate could allow people to be their true selves and speak in a voice that represents who they are. Yes: Modulate could expose institutional vocal bias against certain sounds and accents. But it also could contribute to the world of deep faking and harassment. At what point is digitizing our real-world identity too much?
21/05/1937m 52s

Kevin Esvelt knows the stakes are high. As a geneticist at the MIT Media Lab, Kevin discovered a technique called a gene drive, which gives humans a power we’ve never had before: to change the DNA of entire species in nature. This capacity is so new and so unprecedented that when Kevin made the discovery six years ago, it was “literally unimagined by any human being at that time — not in science fiction, not in any form of literature, not in any scientific journals.” Used successfully for good, a gene drive has the potential to save millions of lives by eliminating diseases like Malaria. But in the wrong hands — or even in well-intentioned hands — the results could be catastrophic. How do we weigh the potential for enormous good against the terrifying unknowns? Host Caterina Fake thinks it through with scientist Kevin Esvelt as well as special guests Baratunde Thurston (Comedian and host of the podcasts Spit and #TellBlackStories); Janna Levin (Director of Science Programs at Pioneer Works, Columbia Professor of Astronomy) and Joi Ito (Director of the MIT Media Lab).
02/05/1945m 53s

When your invention becomes a weapon

What do you do if your invention becomes a weapon? This happened to Chris Anderson, former editor of Wired Magazine, who launched DIY Drones, an open source community that helps anyone build their own flying machines. Chris and his community evolved drones from a military tool to an everyday gadget. Now, drones are used by conservationists to monitor bird's nests, contractors to insure safety standards at building sites, and filmmakers to capture sweeping vistas, among other things. But, they're also used by ISIS to drop bombs on civilians. So, what is Chris' responsibility? Did he foster innovation for a community of like-minded do-gooders or democratize a weapon for a terrorist group across the globe? Host Caterina Fake discusses the possibilities with 3DR founder and CEO Chris Anderson and special guests comedian Baratunde Thurston and Quartz Editor-in-Chief Kevin Delaney.
11/04/1932m 53s

The return of supersonic flight

Throughout human history, we’ve wanted to fly – and to fly fast. So it’s hard to resist Blake Scholl’s idea. His startup, Boom, is building a new supersonic jet, which will fly at twice the speed of sound. If he succeeds, it could be the biggest disruption to air travel since the Jet Age of the 1960s. But progress always has a price. There’s the sonic boom, yes. But also — what happens when the world’s wealthiest can descend en masse on places that used to be hard to reach? And what happens to all of us when supersonic speeds up our already sped-up world? To help us see around this corner, host Caterina Fake discusses the possibilities with Boom Founder and CEO Blake Scholl, and special guests including author Anand Giridharadas, physicist Janna Levin, comedian Baratunde Thurston, and Quartz Editor-in-Chief Kevin Delaney.
28/03/1933m 27s

What if your phone could detect how you feel?

What if your computer had an "emotion chip" — AI that could read the expression on your face (or the tone in your voice) and know how you’re feeling? Could online courses teach you better if they knew when you were bored or confused? Could your car help you stay awake if you drift off when driving? These are the questions Rana El-Kaliouby asked when she built an AI tool that examines every micro-muscle in the human face to detect universal emotions — happiness, fear, grief, disgust.Through her company Affectiva, Rana wants to make technology more human, which she believes will serve us better. But if put the wrong hands, could this emotion-reading engine take advantage of us at our most vulnerable moments? Could our inner thoughts be displayed publicly if we don’t want them to be? How might advertisers exploit us if they are able to read our facial expressions?To help us see around corners — we’re joined by special guests including Esther Perel (Relationship expert; host of podcast “Where Should We Begin?”), Joy Buolamwini (Founder, Algorithmic Justice League); Sam Altman (Chairman Y Combinator, Cofounder Open AI); Greg Brockman (Cofounder, Open AI); and Joi Ito (Director, MIT Media Lab).
14/03/1942m 34s

Tell your troubles to the chatbot

Woebot is a mobile app that gives one-on-one therapy and gets 2 million messages a week. But Woebot isn't a person – it's a chatbot. It was invented and developed by psychologist Alison Darcy and it uses AI to guide users through a session, anytime, anywhere. Darcy hopes that Woebot will help break down the stigma of therapy and help provide services to communities with a lack of mental health resources. But what happens when we remove the human therapist from therapy? Host Caterina Fake, Woebot founder and CEO Alison Darcy, and experts Esther Perel, Baratunde Thurston, and Kevin Delaney debate the possibilities.
01/03/1935m 56s

This headset helps you learn faster. But is that fair?

Neuroscientist Daniel Chao created a headset that hacks your brain with electricity so you can learn as fast as a kid again. It’s called Halo, and it helps you learn motor skills faster. Athletes use it; musicians too. But we’re not far from a future when Halo could help anyone master anything. Where will that take us? Host Caterina Fake leads the journey, joined by Comedian Baratunde Thurston and Quartz Editor in Chief Kevin Delaney, who help Daniel future-cast, and see his invention through the future best for humanity.
01/03/1933m 38s

Launching Feb. 21: Should This Exist?

In the trailer for Should This Exist?, you’ll get a sneak peek (err, listen!) into the first episodes: a wearable that hacks your brain with electric fields so you can learn like a kid again; an AI-driven tool that translates between human and animal languages; a fully automated chatbot that offers one-on-one therapy; and more. Premiering February 21, 2019.
01/03/191m 54s