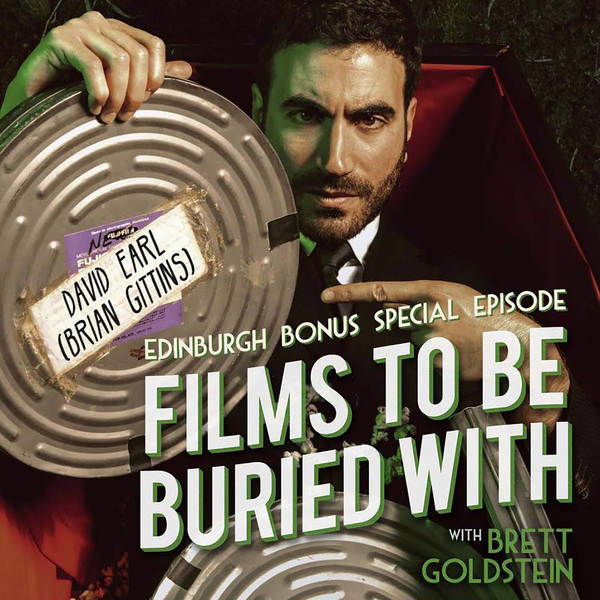 Ladies and gentlemen, welcome to 'Films To Be Buried With' with Brett Goldstein! BONUS EPISODE TIME is upon you as a treat for being an awesome and highly appreciated listener - here’s a special from up at the Edinburgh Fringe with Brett and good friend David Earl aka Brian Gittins!

The often referenced man himself, Brian Gittins, joins Brett in a rare one-on-one podcast in Brett’s comedy cottage, where the two sit very close to one another (Brett sitting like Michael Parkinson in full interview mode) and get deep into movie talk. From the outset, Brian might appear a little foggy but oh good heavens does that change as the episode goes on… It turns out he’s a proper film nerd, so enjoy Brett teasing all kinds of goodies out of the man, starting with good old fashioned death talk, then venturing into topics such as film locations, theories on why action stars were huge in the 80s (a very interesting theory indeed), bad films and cult bad films and how they obviously didn’t set out to be bad, film theft vs homage, and a ton of other fun.

BE SURE TO CHECK OUT BRIAN’S SHOW ‘DON’T FEED THE MONKEY MAN’!

ALSO BE SURE TO CHECK OUT BRETT'S SHOW 'WHAT IS LOVE BABY DON'T HURT ME'!

• BRIAN & BRETT IN THE STUDIO!