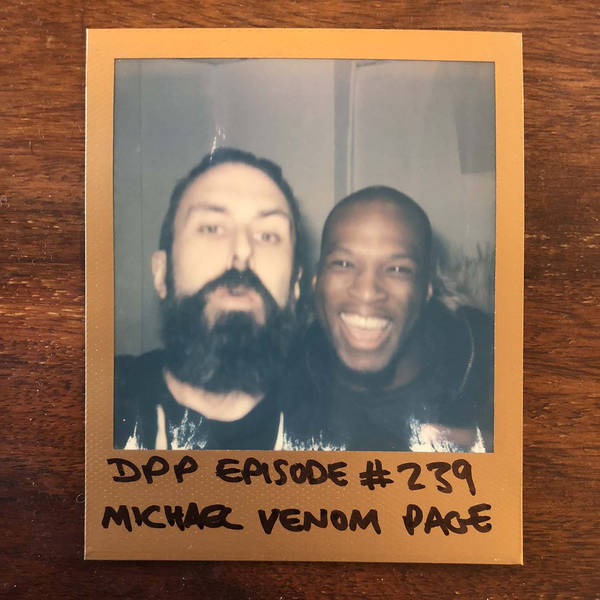 Welcome, welcome, welcome to episode 239 of the Distraction Pieces Podcast with Scroobius Pip! A long, long awaited meet up here as Pip is joined by the Most Valuable Person in this whole MMA business… It’s the phenomenal MICHAEL VENOM PAGE!

“I’m very present when I’m fighting, and it sounds weird to say but I’m not emotionally in the fight...”

Of course, MMA heads by now will just be clicking or tapping that download button without reading any further, but for those of you perhaps less familiar, you are also in for a real treat. MVP is an awe inspiring fighter, and for even the fairest weather fans of mixed martial arts his skill will dazzle you. With a unique style and mad victory set pieces, he’s become full on notorious in the sport and here he gets a good chance to catch up with Pip on all aspects, including the swiftness of the MMA universe, how he wants people to stick around for the whole thing - not just him, how you can enjoy and absorb so much more in MMA when you educate yourself on the moves, his family being into early kung fu film classics (must be some Wu Tang or 36 Chambers action in there somewhere), how hard it would be to transition to MMA from boxing, focusing on his strengths in training to catapult him to success, sprawl and brawl, having faith in his coach, being present in a fight and not studying tapes, how trash talk only works if it’s your true self talking it, being true to your personality, and everything else in between - including those amazing victory set pieces (as well as the full background behind the Pokemon one!). Inspiring talk from a positive and encouraging voice - a whole lot to enjoy. GO IN!

• NOTE! As Pip mentions in the intro, the sound isn't quite as sparkly as it could be, due to this being a backup recording. I've tried to get it as polished as possible, but there are intrusive noises at points... It's decent though - just wanted to give a heads up! Cheers yo! - Buddy Peace (producer)