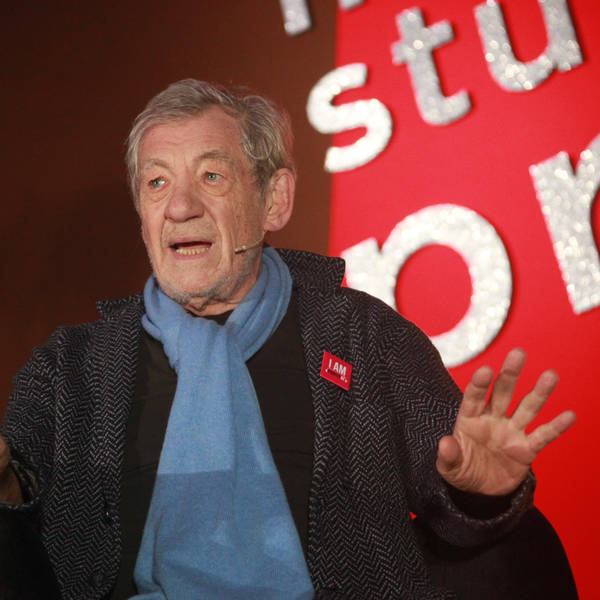 Evan Davis interviewed Ian McKellen on the #QueerAF podcast at National Student Pride 2019 at the University of Westminster, discussing his lifetime achievements and relationship with the LGBT community.

They spoke about #MeToo, chemsex, drugs, his coming out, the #MeToo movement and empowered the young LGBT+ audience.

Davis and McKellen hosted a live-stream of #QueerAF the National Student Pride podcast.

McKellen spoke about when he first tried a joint at the age of 30, with Evan Davis adding that ‘drugs were much weaker back then’.

The audience at National Student Pride were enthralled by Ian with his re-tellings of his pursuits to join the theatre as “one of the reasons I became a professional actor is because I learned that I could meet queers in the British theatre” and admitting “I just wish when I was younger I could have been myself”.

McKellen got many a laugh with his unrelenting wit, gesticulating at one point about “drawings of genitalia in public bathrooms”.

The conversation also looked at various aspects of McKellen's life:

- His coming out story

- His advice to young LGBT+ students

On Me Too he says:

'Well frankly, I’m waiting for someone to accuse me of something, and me wondering whether they’re not telling the truth and me having forgotten (pointing to his head) you know.

But with the couple of names you’ve mention, people I’ve worked with, both of them were in the closet. And hence all their problems as people and their relationships with other people, if they had been able to be open about themselves and their desires, they wouldn’t have started abusing people in the way they’ve been accused.

Whether they should be forced to stop working. That’s debatable. I rather think that’s up to the public. Do you want to see someone who has been accused of something that you don’t approve of again? If the answer’s no, then you won’t buy a ticket, you won’t turn on the television. But there may be others for who that’s not a consideration.

And it’s difficult to be exactly black and white.'