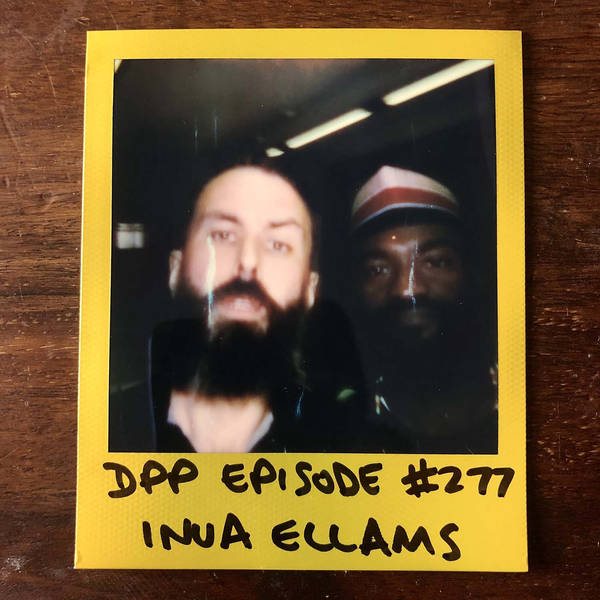 Welcome, welcome, welcome to episode 277 of the Distraction Pieces Podcast with Scroobius Pip! A true powerhouse of an episode this week as Pip catches up with an old pal from the spoken word and poetry scene who has an incredible tale or two to tell, it’s INUA ELLAMS!

You’d be well advised to either listen a few times or just keep a pen and paper by your side, as there are a LOT of gems and quotables in this one! An amazing chat with Inua, as he and Pip get acquainted again for the first time in around a decade. Inua’s tale is not only fascinating from start to present point, but you also get the benefit of milestones of wisdom from the man himself as he is now able to draw conclusions, extract lessons and offer context to the situations in which he found himself. From his beginnings in Nigeria and his subsequent journey out of there (which involves his father and a story worthy of a film premise), to his movements to Ireland and growing up in the more deprived areas, to being introduced to Saul Williams via a mysterious CDR, to his entry into poetry through not having enough money to paint (but a need for manual creativity), the Nigerian attitude and work ethic combined with an immigrant perspective (‘get up and go’ mixed with ‘nothing to lose’), being taught poetry by a basketball teacher, rewriting Romeo & Juliet, leaving home and passport woes, the power of trust, throwing rap parties and SO much more including - of course - his new play ‘The Barbershop Chronicles’ and what you can expect! So much in here. You’ll dig it without question.

• THE HALF GOD OF RAINFALL