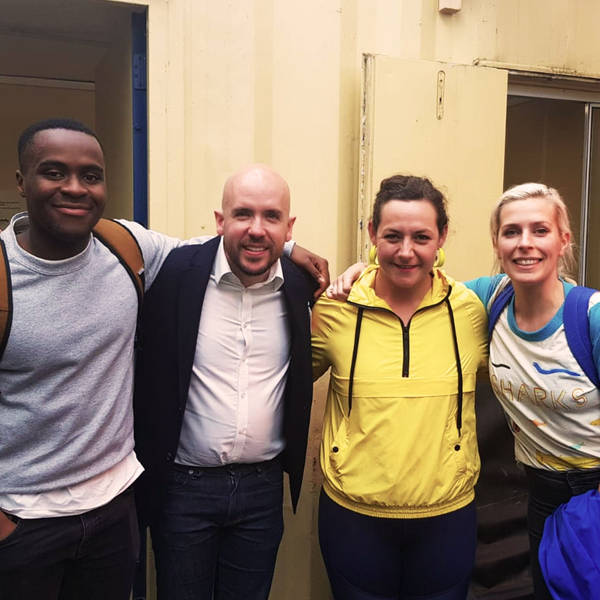 This week’s episode comes from the totally brilliant Underbelly Festival on the Southbank, where I ate stunning brownies and Indian street food joined by such a banging audience and all-star guests: Sara Pascoe, Tom Allen and Liam Charles from Bake Off.

And then we’re only on A WHOLE BLOODY TOUR from the Autumn. First dates are released here if you click where it says ‘bloody tour’ and dates are being added all time. This is big shit. I really want you to come and bring everyone you’ve ever heard of. The guests are going to be off the flipping charts.

My guests were in the glorious TOM ALLEN. SARA PASCOE whose new book SEX POWER MONEY is available to pre-order now and out at the end of August. And of course the brilliant LIAM CHARLES whose the new judge of C4’s BAKE OFF JUNIORS This episode was recorded at the UNDERBELLY FESTIVAL on the Southbank.

What we ate was from the beautiful HORN OKAY PLEASE who are sharing the Indian Street food love all over London most flipping days. It was mind-blowing. And the vegan brownies that blew everyone’s heart in the end were made in Norfolk and available online, all the time from SIMPLY CAKE COMPANY.

MY WEBSITE is here, should you want to come to any of my stand up gigs, previews, Edinburgh tour dates and most importantly for now HOOVERING TOUR DATES.

The sitcom Sara face-planted a cake in was called CAMPUS

The humans we mentioned were AMY SCHUMER, DUA LIPA and CARMEN CORTEZ from the Spy Kids.