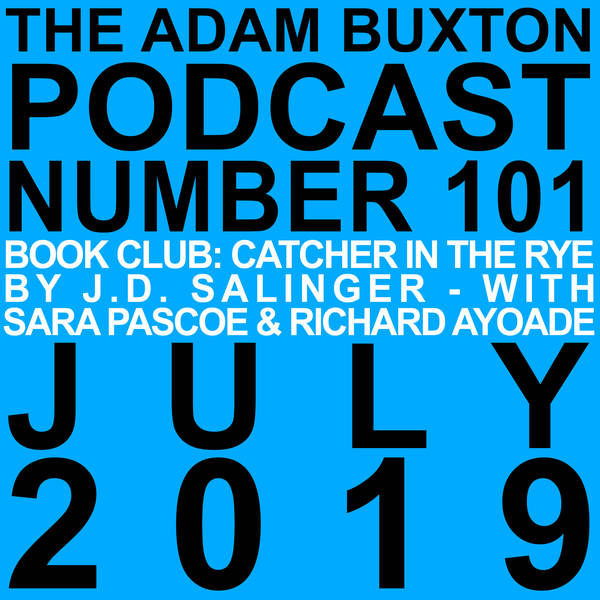 EP.101 - BOOK CLUB: 'THE CATCHER IN THE RYE' WITH SARA PASCOE & RICHARD AYOADE

Adam talks with Sara Pascoe and Richard Ayoade, (two British comedians who have also read and written, more than one book) about J.D. Salinger's classic 1951 novel 'The Catcher in the Rye'.

SYNOPSIS: The story begins with 17 year old Holden Caulfield recuperating following a breakdown. The rest of the book is an account from Holden's point of view, of the events that lead to that breakdown, which took place the previous Winter in the days following his expulsion from Pencey Prep, a private school.

Holden's roommate is a meathead called Stradlater who has sexy plans for Jean Gallagher, a childhood friend of Holdens who he feels protective of. A a fight ensues after which Holden spends two days killing time in New York before he has to face his parents and inform them of his expulsion.

We learn that things have been difficult for Holden since the death of his younger brother Allie when Holden was 13. From time to time Holden dwells on the memory of Allie's old baseball glove on which his little brother had written poems to read during boring baseball games. Now Holden entertains hopes of moving in with his older brother DB, a WWII vet who has become a successful screenwriter in Hollywood.

During his visit to New York, a lonely Holden visits a jazz club and spends much of his remaining cash buying drinks for three older women, after which he arranges an abortive liaison with Sunny, a teenage prostitute and falls foul of her thuggish pimp Maurice.

Later Holden arranges a meeting with an old girlfriend, Sally Hayes, and is briefly looked after by a well meaning teacher Mr Antolini. But Mr Antolini's affections are interpreted as predatory by Holden who ends up, distraught and emotional, creeping into his parents house to see the only person in the world he feels he can really talk to - his little sister Phoebe.

Thanks to Anneka Myson for additional editing and Seamus Murphy-Mitchel for production support on this episode.