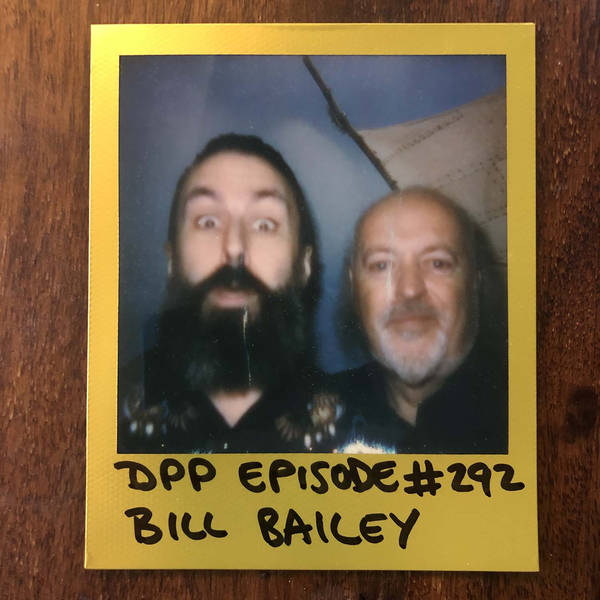 Welcome, welcome, welcome to episode 292 of the Distraction Pieces Podcast with Scroobius Pip! A long awaited chat is your gift this week as Pip is joined by music, comedy and acting treasure BILL BAILEY!

With Bill’s new appreciation of the early morning start, and enjoying those gems that are the early hours of the day, he joins Pip for some ace earlier-than-afternoon chattalogical goodness which includes so much, from back in the day to… now in the day? You know what I’m getting at. So you can absolutely expect to hear all manner of awesome including how he’s well up for the promo run, with a renewed appreciation for the talking element of it all, his newfound discipline - or that is to say ‘sharpened’ discipline, the new series of ‘In The Long Run’ in which he stars alongside creator Idris Elba (on Sky NOW!), his approach to the series and he tries not to install his own comic leanings on the proceedings, the ‘biomechanics’ of comedy and the District 9 theory, the importance of collaboration, how awesome Idris Elba is, the shock of coming from the mainly white Westcountry to multicultural London, Bill’s lightbulb moment for comedy at a London vegan anarchist commune, influences and respect for tradition, the DVD boom of the 00’s and how he got caught in it, the great equaliser of a shared artistic experience, and with that - the importance of sharing, Never Mind The Buzzcocks and QI and all kinds more! Lovely stuff, start to end. Have fun!

• BILL on THE INTERNET

• IN THE LONG RUN