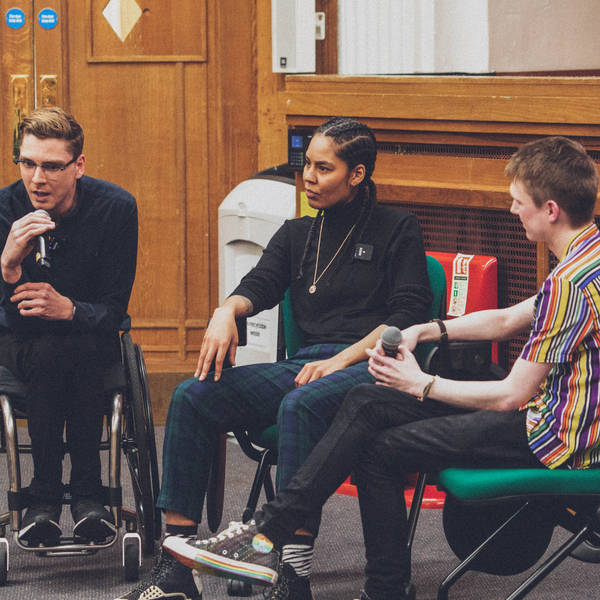 Access All Rainbows: Being LGBT+ and Disabled – Live Episode

Recorded live as part of National Student Pride, at the University of Westminster in collaboration with the university's Creative Enterprise Centre: We present Access All Rainbows.

Join our conversation about being LGBT+ and disabled, considering; Hidden disabilities, access, perceptions on ability and, support in relationships.

Jamie Wareham – University of Westminster Alumni Jamie Wareham is the Head of Digital Production at Attitude Magazine and host of National Student Pride's podcast #QueerAF. Jamie recently spoke at the inaugural WINC festival about coming to terms with his hidden disability, and how that has become part of his wider queer intersectional identity.

Callum Dziedzic –Callum is a script editor working in TV drama. He is an alumnus of the University of York’s Film and Television Production degree and Channel 4’s Production Training Scheme. Since graduating he has assistant script edited Ackley Bridge at The Forge, and Giri/Haji, a contemporary bi-lingual thriller produced by Sister Pictures for BBC Two and Netflix. More recently, Callum has developed an international nuclear armament thriller with Pulse Films and Netflix and has returned to Sister Pictures to script edit an upcoming comedy drama for BBC Two.

Callum was born with Tetraplegic Cerebral Palsy and uses a manual wheelchair for mobility. To him, the act of storytelling in film and television is intrinsically inclusive and universal. Ultimately, a great story can come from or captivate anyone, and it should not just be regarded as a means of self-expression but also as a way of levelling the playing field for all.

Char Bailey - Char is a celebrity life coach, acclaimed writer and speaker. Black, lesbian and autistic woman, she is the co-host of the Qmmunity podcast and well-being ambassador for UK Black Pride

This season is inspired by National Student Pride's themes:

We are #QueerAF. And so are you.