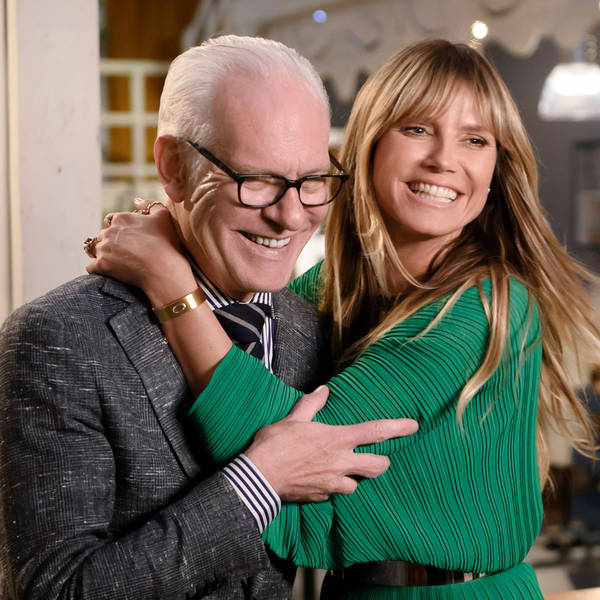 296: Will Heidi And Tim's New Fashion Show Be Making The Cut?

One half of the GFY brain trust, Heather Cocks, came back to discuss Amazon's Project Runway with a big-budget twist: Making The Cut. As much as we love Naomi Campbell's sugar-free approach to, well, life, the panel agreed that Making The Cut has some structural problems (too long; dumb Tim 'n' Heidi "friend dates"), and too tight a focus on NOT being a sewing competition. Will any of us keep watching? You'll find out before we decide whether Emily Is Not A Crackpot for wanting period shows to air period commercials. We'll go Around The Dial with Call The Midwife content warning, the return of One Day At A Time, Barry, homemade Lego Masters spinoffs, Top Chef, and a Better Call Saul sound drop; later, we'll feel relieved that the Sherlock episode we all THOUGHT Erica presented as a Canon contender is actually for the Nonac. Kate McKinnon won, celebrity quarantine-busters lost, and Game Time stretched those family ties (sha la la laaaaa). Tick tock: it's an all-new Extra Hot Great.

The EHG gang have been recording this podcast for almost a decade now. In podcasting terms, that makes us positively Methuselahian. Since the start of EHG, our listeners have asked if we had a tip jar or donation system and we'd look at each other and say surely that is a joke, people don't pay other people to do podcasts. We'd email them back "Ha ha ha, good one, Chet" and go about our business. Now we are told this is a real thing that real nice people do. Value for value? In today's topsy turvy world? It's madness but that good kind of madness, like when you wake up at 3:15am and clean your house. Or something. In all seriousness, we are humbled by your continued prodding to get a Patreon page up for EHG and here it is!