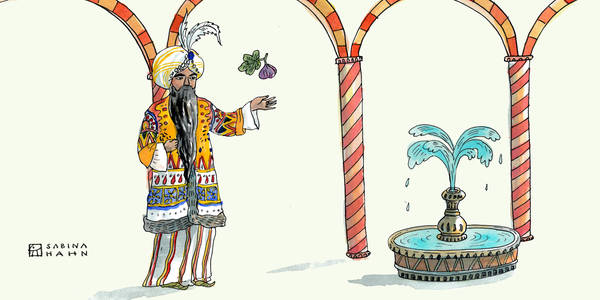 When you need advice, what kind of advisor do you turn to?

In today’s story, we’ll meet an advisor who’s none of these things. And the person he’s advising -- a wealthy, powerful sultan -- has no idea!

Our story is called “The Sultan’s Figs.” Versions of this tale originally come from North Africa and the Middle East.

Voices in this episode include Mike DelGaudio, Shazad Latif and Anthony Rapp. Grown-ups, you can see Shazad and Anthony on the CBS All-Access series, Star Trek. You can also check out Shazad Latif in three Netflix shows -- Dark Crystal: Age of Resistance, Penny Dreadful and Toast of London -- plus the upcoming indie film, Falling For Figaro. Anthony Rapp has starred in dozens of Broadway plays and musicals, including Rent and If/Then, opposite Idina Menzel. He’s the author of the book, Without You: A Memoir of Love, Loss, and the Musical Rent.

To give to Circle Round got to WBUR.org/supportcircleround