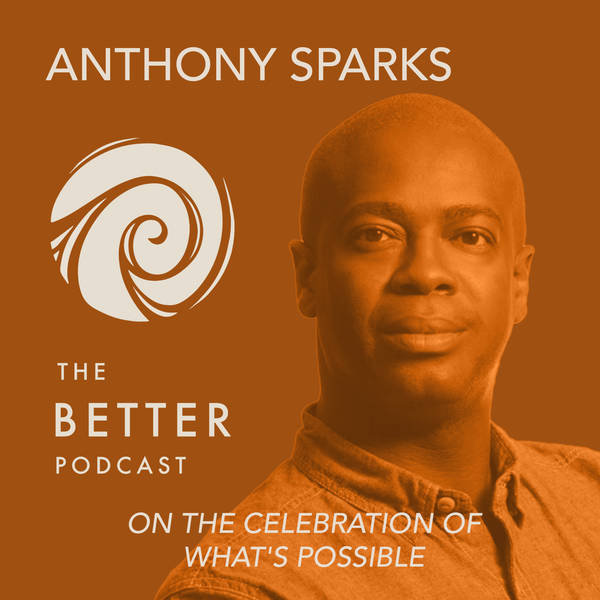 Joe chats with Anthony Sparks about coming up in the theatre: at Williamstown, at the Public Theatre and for five years in the Off-Broadway smash hit Stomp! The lessons he learned, both on stage and auditioning out in the world, inspired him to take a more active role in the projects he would choose to be a part of and later create into existence. Anthony shares insight into the purpose of his art: whether it’s a solo show, show running and collaborating alongside Ava Duvernay for Oprah Winfrey, or creating his own shows for Blumhouse TV. Ultimately, we hear his Why, and his deepest vision for how he is trying to shape the images we collectively see on our screens as a means of transforming the world.

Anthony Sparks hails from Chicago’s South Side and has worked in television over the last 19 seasons. A strong advocate for diversity and inclusion in television, theatre and film, Anthony is the longtime Showrunner, Head Writer, and Executive Producer of the critically acclaimed OWN/Warner Bros. Television drama, “Queen Sugar”. Queen Sugar, created by filmmaker Ava DuVernay and executive produced by Oprah Winfrey, is currently airing its 6th season. Anthony has been a key writer and producer with the show since its inception.

In addition to Queen Sugar, Anthony is also currently an Executive Producer on the highly anticipated HULU limited series, Iron Mike, about the controversial life and times of Mike Tyson. Sparks is also developing several new series with Blumhouse Television, where he recently signed an overall First Look Deal, and also with Endeavor Content.

It was also recently announced that Sparks will create, showrun, and executive produce a scripted drama inspired by the Detroit Youth Choir, which rose to prominence on America's Got Talent in 2019. Anthony is writing and developing this show for the Disney+ streaming network.

Anthony holds a BFA degree in theatre, and M.A. and Ph.D. degrees in American Studies & Ethnicity, all from USC, the University of Southern California. Anthony received the Jack Nicholson Award, LeVar Burton Award, and Doolittle Associates Award while an undergraduate at USC and the Anna Bing Arnold Fellowship while pursuing graduate work at USC.

Dr. Sparks is also a cutting-edge scholar of media, performance studies, and African American politics and culture. He has consulted and written for Disney Imagineering and when time allows, he mentors and teaches screenwriting and cultural studies at Cal State Fullerton, Occidental College, and USC.

Anthony Sparks is based in Los Angeles, where he is married to actor-director and USC School of Dramatic Arts professor and Associate Dean, Anita Dashiell-Sparks. They live in Los Angeles and are working hard to raise their three young children.

-Gina Davis Institute on Gender in Media & Documentary ‘This Changes Everything’
https://seejane.org/about-us/
https://www.netflix.com/title/81110773