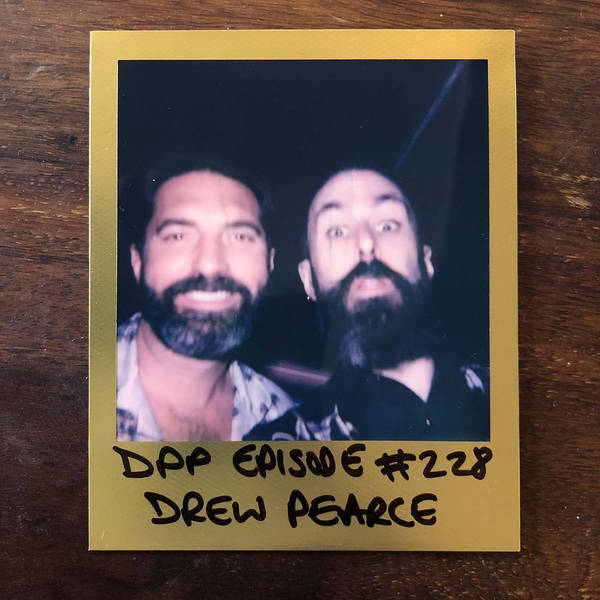 Welcome, welcome, welcome to episode 228 of the Distraction Pieces Podcast with Scroobius Pip! A full on writing and directing masterclass right here as Pip is joined one of the busiest bigshots in the Hollywood multiverse, DREW PEARCE!

While you may not see Drew acting alongside big screen pals like Tom Cruise and Robert Downey Jr, by god he is busy working on scripts, rewrites, edits and all that entails which contribute to the blockbusters they star in… With the behind the scenes arts of the movie industry proving of just about equal importance to the more visible side, Drew’s presence is hugely necessary, vital in fact, as you will hear in this chat with Pip - though he is currently enjoying the success of his directorial debut ‘Hotel Artemis’, which gets big chat time here. Powerful truths about the industry as well as some hard earned wisdom right here, as he and Pip get into such topics as embarrassing recording failures (they begin with that!), how his directorial debut began life on a mere notepad, how he eschewed pristine for grubby and the VHS image reference in said directorial debut (‘Hotel Artemis’), the art of the modern trailer edit and showing people exactly what they’ll be paying for, risk taking in film, the control audiences feel they lack in modern cinema, the Netflix algorithm, the mantra “Work with what you’ve got, not what you hoped for”, the behind the scenes process of rewrites and special effects, reshoots and draft and edits, entire roles being edited out and topping everything off with a tasty Ghostbusters rumour expanded upon. Or maybe even myth-busted. Brilliant stuff.